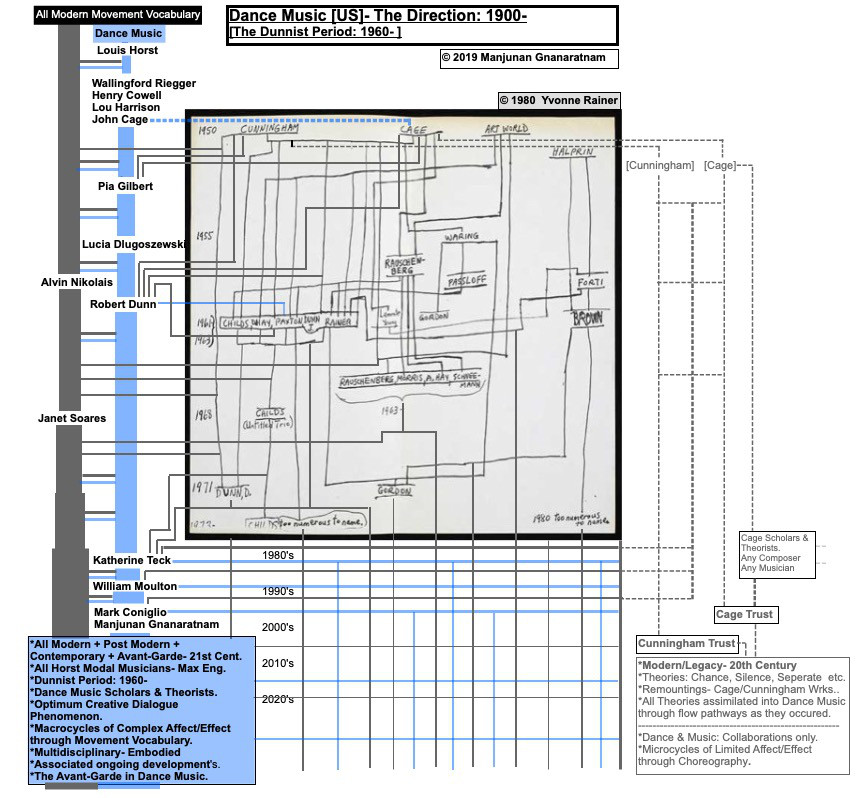 The Avant-garde of any art form is spearheaded by its artists, then documented by its scholars, theorists and historians. During the 20th century, dance [Concert Dance], with the kinesthetic body as its instrument, deconstruction as its primary process for investigations, movement vocabulary as its language, and choreography as its creative outlet, examined its inherent multi-disciplinary identity extensively resulting in the development of modern dance, followed by post-modern dance, leading us into the 21st century. Music/Sound, an integral component of this multi-disciplinary identity of dance, negotiated all aspects of these developments through both periods into the latter part of the last century, establishing a direction and a comprehensive practice in music that is now specific to dance. However, scholars and theorists on this are yet to emerge, leaving the discourse on this subject to those from both music and dance fields to collaborate on viewpoints, when called upon, deferring to each other for analysis and conclusions and almost often now, falling short. Hence, until dance music theorists and scholars emerge, those who don’t need to collaborate on the subject for analysis and conclusions, the attached diagram, incorporating Yvonne Rainer’s from 1980, reflects the extensive developments in this collaborative art form that occurred during the 20th century, from Louis Horst’s work with Martha Graham, to now, beyond the micro cycles of limited affect/effect of the situational and now ubiquitous conventional music and dance collaborations through choreography, to the macro cycles of complex affect/effect of the feedback loops and pathways of a symbiotic artistic flow of influence through movement vocabulary, and from it, the extensive multi-disciplinary explorations that occurred between some of the critical figures from both music and dance, including, extending their own creative capabilities beyond the conventional practices of their own art, all of which in turn influenced both art forms while establishing a specific, complex lineage and practice of dance music, pointing to where future directions of it will come from. Hence, the discourse on this collaborative art form of Dance and Music doesn’t have to begin at point A, as it has long ceased to be a novelty. The 21st century conversations on it can and should continue from point R.  Beyond 20th century conventional collaborations to a 21st century symbiosis.

Multi-Instrumentalist, Technologist, Composer, Developer & Theorist, Manjunan Gnanaratnam, works as an Interdisciplinary Artist within all contexts of Modern, Post-Modern, Contemporary and  Experimental Dance. With an extensive career spanning 35+ years, he is considered one of the foremost thinkers on the relationship between Movement and Sound in the US today.