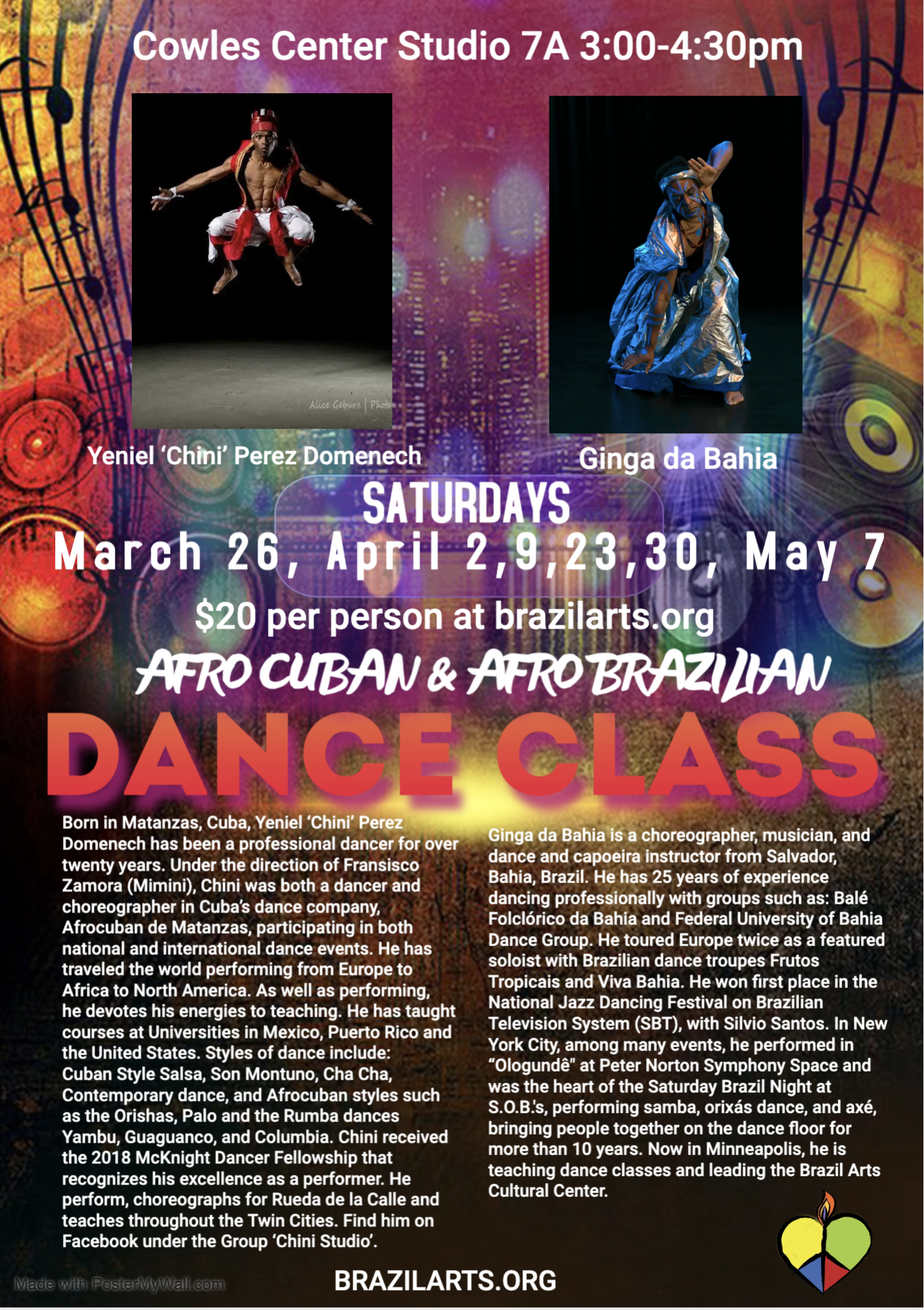 Leading a dance class series together for the first time: Yeniel ‘Chini’ Perez Domenech and Ginga da Bahia. Explore the connections between Yoruban dance as transformed in Cuba and Brazil. Open to all levels.

About the teaching artists:

Born in Matanzas, Cuba, Yeniel ‘Chini’ Perez Domenech has been a professional dancer for over 25 years. He graduated from the prestigious Escuela Nacional de Arte in Havana, Cuba in 1991. Chini then became a member of Afrocuba de Matanzas, under the direction of Francisco Zamora Chirino ‘Minini’. He danced in both national and international tours, taught and was invited to choreograph for the company. In 2006, he moved to Mexico and danced with a variety of groups and performed as a guest dance artist with famous Latin bands including Latin Grammy award winning Los Van Van and Pupy y Los Que Son Son. In 2011, Chini moved to Minnesota. He immediately began dancing with Rene Thompson’s Street to Stage group. He went on to work with Patrick Scully, Curio Dance and has connected with Brazilian, West African and Hip Hop artists in the Twin Cities. Chini now performs and choreographs for Rueda de la Calle and his own performance identity Chini Company. He is a passionate dance educator teaching Cuban and other Latin dances in a variety of venues from school workshops to nightclubs to Chini Studio. Throughout his career he has performed in theaters, festivals and nightclubs reaching a broad range of audiences and communities.

Ginga da Bahia is a choreographer, musician, and dance and capoeira instructor from Bahia, Brazil. He has 25 years of experience dancing professionally with groups such as: Balé Folclórico da Bahia and Federal University of Bahia Dance Group. He toured Europe twice as a featured soloist with Brazilian dance troupes Frutos Tropicais and Viva Bahia. He won first place in the National Jazz Dancing Festival on Brazilian Television System (SBT), with Silvio Santos. In New York City, among many events, he performed in “Ologundê” at Peter Norton Symphony Space and was the heart of the Saturday Brazil Night at S.O.B.’s, performing samba, orixás dance, and axé, bringing people together on the dance floor for more than 10 years. Now in Minneapolis, he is teaching dance classes at MCTC college and leading the Brazil Arts Cultural Center.